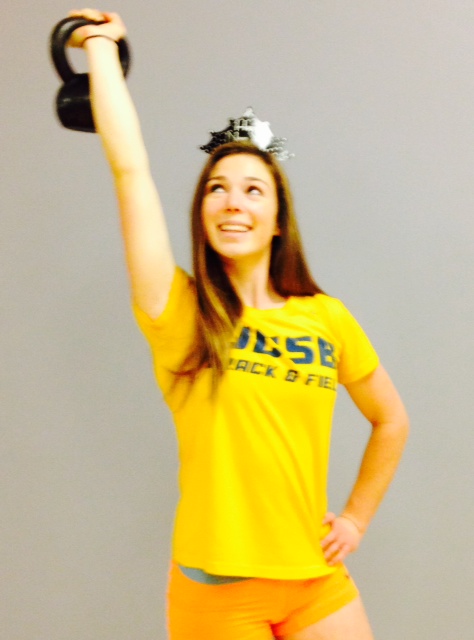 Model Katie Lee holds a kettle bell   and ponders her New Year’s resolutions. Health and Fitness Specialist Connie Aronson recommends that those who wish to keep their resolutions ” wait 10 minutes” or ” write themselves a letter.” Courtesy photo of Connie Aronson.

Every year, 45% of Americans make a New Year’s Resolution, an earnest promise to be better or try harder. Call them the agents of change, as theses people are ten times more likely to attain their goals.
Last year, according to a University of Scranton study, losing weight, getting organized, spending less and saving more were the top three resolutions. Maybe the bravery of setting new goals is just too overwhelming for the rest of us. After all, change is hard.

The good news is that you don’t need a new diet or self-help book, or just plain will power. Science shows that our bodies and brains need to get on board together. We need to understand why we aren’t already doing the particular things we need to do for change to occur.

We all struggle with temptation, addictions, distractions, excuses, and procrastination. Overeating chocolate mint brittle all week long doesn’t mean you are a bad person. Our struggles are universal experiences and part of the human condition. “Our human nature,” writes Kelly McGonigal, Ph.D., in The Willpower Instinct, “includes both the self that wants instant gratification and the self with a higher purpose.”

Dr. McGonigal describes our struggles with temptation and procrastination from research published in 2007 involving some chimpanzees and humans. The humans were students from Harvard and the chimps from the prestigious Wolfgang Koehler Primate Research Center in Leipzig. The challenge was to delay the gratification of an immediate snack for more food. The temptation: Grapes for the chimps, and raisins, popcorn, M&M’s and Goldfish crackers for the humans.

First, they could all choose between 2 or 6 treats, which was easy, as both humans and chimps agreed that six was better than two. Then each competitor was given the choice to eat two treats immediately, or wait two minutes for six. When they had to wait for the treat, the patient chimps won out: an impressive 72% of the time, yet the students waited only 19% of the time.

Blame it on how humans rationalize. We have all sorts of mental tricks thanks to our prefrontal cortex’s ability to rationalize bad decisions and promise we’ll be better tomorrow.

“We’re rational until we aren’t,” Dr. McGonigal writes. The same goes for when the short-term reward is staring at us in the face: we want it now. Immediate gratification.

Try either of these following tips for success in reaching your goals in 2014:

The brain’s reward system doesn’t care about the future.

Staring at M&M’s triggers the older, more primitive reward system of dopamine driven desire, when food for survival was the reward system’s original target. But temptation has a narrow window of opportunity.

As a waitress, management taught us that dessert sales were lost if you didn’t get to the table as soon as dinner plates were removed. When temptation is visible, the warm cobbler going to the next table for example, the prefrontal cortex is really overwhelmed. If you have to wait for your waiter, or distance yourself between you and the temptation, the balance of power goes back to the brain’s system of control.

The same is true for your own trigger: put them out of sight.

Write yourself a letter

“Imagine looking back at 2014, from a place of having achieved your most important goal for the year,” Dr. McGonigal writes in “Five Things You Can Do Instead of New Year’s Resolutions.” “In your letter, thank your present self for all you did to achieve your goals—and be specific. Or give yourself some compassionate advice from your wiser, 2015 self. Research shows that connecting to your future self in this way can help you make a difficult change and succeed at your goals.”

At times, our own light goes out and is rekindled

Give your feet & ankles TLC as they are the found

3 top exercises for great glutes- how to get them

A proud day for our country, for the waiting, for

Looped lunge. In step back lunges, try to keep m